Elijah Brush was born in the early 1770s in Bennington Vermont. His father was a Revolutionary War Army Colonel. Elijah a graduate of Dartmouth College had studied law and was admitted to the bar. He came to Detroit in 1798 and practiced law. Brush was Michigan's first lawyer.

In 1803, Brush was elected a trustee of the town corporation, and in the same year served as a supervisor. In 1805 he was appointed Lieutenant-Colonel of the Legionary Corps of Territorial Militia. Under the Act of 1806, Brush was appointed the second Mayor of incorporated Detroit. He was also appointed Treasurer of the Territory in 1806 and served in that post until December 1813.

Brush purchased the Askin Farm in Detroit in 1806, and it became known as the Brush Farm.

Brush was one of the first abolitionists in Detroit. Prior to 1807, slave Peter Denison (father to Elizabeth Denison Forth) had been indentured to Elijah Brush for a year, after which Brush granted Denison his freedom. Apparently, Brush had taken this action without the knowledge or approval of Denison’s owner, Catherine Tucker. Tucker protested the emancipation and demanded Denison’s return, and a subsequent writ of habeas corpus on behalf of Denison forced the Michigan territorial government to decide on the slavery question. Brush's case, Denison v Tucker, was the first case to test the right ot hold slaves in Michigan. It was filed in 1807.

Judge Augustus Woodward, however, ruled for Tucker on the basis that the treaty under which the British abandoned the Northwest Territory guaranteed the property rights of British citizens remaining in the territory after the Americans took over. This guarantee, Woodward said, included slaves like the plaintiffs who were born prior to the effective date of the Northwest Ordinance in Detroit in 1793. The Denison children would therefore remain Catherine Tucker’s property.

Scholars believe Brush very likely helped the Denison family in their escape to Canada to seek freedom for their children born into slavery and then assisted with their placement there.

It was in his capacity as Militia Colonel that Brush and others were forced into the capitulation of Detroit to the British in 1812. The officers were forced to leave the city and territory for Toronto, then known as York. Brush's brother-in-law Askin was a British officer and through his influence Brush was paroled, and sent behind American lines to Ohio.

Under General Harrison’s command, Brush and his forces re-entered Detroit in October of 1813.

On December 14, 1813 Colonel Elijah Brush died. He is buried in Section A, Lot 73. A picture of his monument is below. 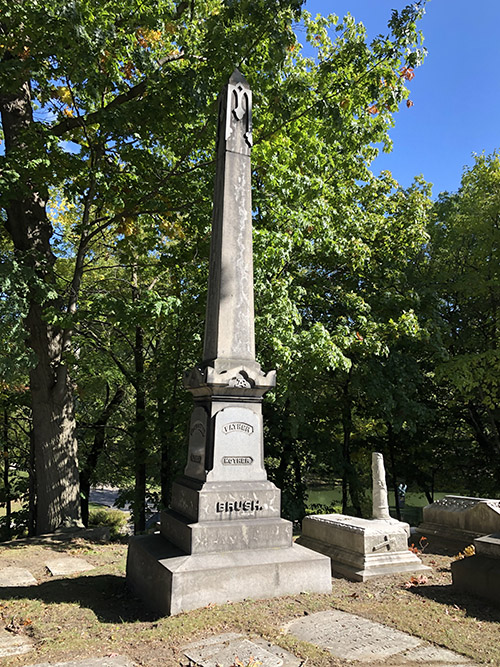