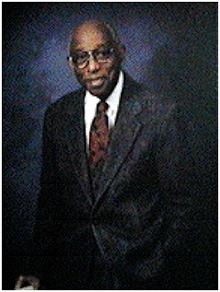 Dr. Charles Howard Wright was born on September 20, 1918 in Dothan, Alabama. He attended Southeast Alabama High School and then Alabama State College, graduating from each institution in 1935 and 1939, respectively. Dr. Wright graduated from Meharry Medical School in 1943.

Following medical school, Dr. Wright received additional medical training at Harlem Hospital in New York, where he served as an intern and pathology resident in 1943 and 1944. Dr. Wright accepted a second Pathology residency at Cleveland City Hospital in Cleveland, Ohio, completing his second residency in 1945. From 1946 to 1950, Dr. Wright practiced general medicine in the city of Detroit, until Harlem Hospital notified him of a slot in their residency program in Obstetrics and Gynecology. He returned to New York and completed the program in 1953.

He was granted admitting privileges at Hutzel (then Woman's) Hospital in Detroit upon his return. Dr. Wright was board certified as an OB-GYN specialist and as a general surgeon in 1955. He was an emeritus attending physician at Harper-Grace Hospital and a senior attending physician at Sinai Hospital. In addition, Dr. Wright was an assistant clinical professor of OB-GYN at Wayne State University Medical School from 1969 to 1983. He continued practicing medicine in Detroit, becoming a Senior Attending Physician at Hutzel Hospital, until retiring in 1986.

In addition to his medical career, Dr. Wright has always been involved in the social and political aspects of medicine and society. Dr. Wright was a tremendous force in the integration of Detroit hospitals, beginning in 1956 with Hutzel Hospital. In 1960, he spearheaded the African Medical Education Fund through the Detroit Medical Society in order to fund medical training in the United States for Africans. A call from his niece in 1965 prompted his travel to Bogalusa, Louisiana where he served as a resident physician during civil rights marches. In 1964 and 1965, he engaged in medical surveys in West Africa. Dr. Wright also traveled to Cartegena, Columbia in 1967 to serve on the S.S. Hope, a floating hospital for people in need.

In retirement, Dr. Wright wrote and published one of the few volumes about the history of African Americans in health care in Detroit, entitled The National Medical Association Demands Equal Opportunity: Nothing More, Nothing Less (1995). He is also the author of Robeson: Labor's Forgotten Champion (1975) and The Peace Advocacy of Paul Robeson (1984).

The following comments by Dr. Wright illustrate actions made against segregation in "white" institutions:

"I went to Hutzel...it was called Woman's Hospital then, that was a very prominent women's hospital, and it was a white hospital, it still is----anyway it was very prominent, and it was prominent for me as an obstetrician because I was...this is what I did--OB-GYN. What happened though, in 1956, three years after I got started, a senator from Michigan wrote in the Detroit Free Press that the government had appropriated $600,000, I think, in renovation money for Hutzel (that's the name of it--Hutzel Hospital) to alter its operating room, delivery room, and this kind of thing, and this was their participation in the medical center development. So his name was Hart, Phil Hart was his name, senator, and so that afternoon (and this was the morning paper) I sent him a letter telling him, "Don't give them a dime." I said, "They discriminate against my patients." They wouldn't allow my patient to come into the hospital if there was not a vacancy in a room where another black patient was. And they didn't accept black interns and residents. And they took me largely because I had been recommended by [the same doctor at Sinai Hospital], and I knew that was no way to do it. So I wrote him and told him, "Don't send them a dime," and I said, "now you don't have to come at any time, any particular time to check on it, come any time and see for yourself." And he sat down and sent copies of everything I said to him to the chairman of the board of trustees at Hutzel. He said, "Dr. Wright is accusing you of this. Is it true?" Well, he made such a noise until he might come and look. And did you know the next day they were integrated.
They never forgave me for whistling. I was a whistle-blower. But that didn't matter. You take your lumps, and then you go ahead. But the community knew what we were doing, and so rather than lose that money, they came along. That was just part of our fight. We used to go into the board rooms in Grace [Hospital] and other places, and meet with the superintendent of the hospital. We wanted to know, "Why aren't you integrating? What are your plans? Do you have any long-term plan?" And they would hem and haw and promise and stuff, but nothing much happened until we threatened to shut it down, and then they got the message."

The actual audio clip of this interview is available through the Kellogg African American Health Care Project.