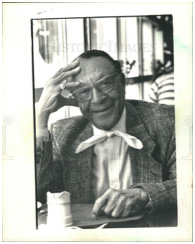 Wilson came to Detroit in the early 1930s and enrolled at the University of Detroit with an interest in law. He soon left school, however, to enter show business as a master of ceremonies at the Harlem Cave, located at the corner of Canfield and Brush streets. Interested in acting and singing since his childhood, Wilson worked at the club introducing acts, telling jokes, and dancing to the house band led by trumpeter Bill Johnson, a former member of Detroit's famous McKinney's Cotton Pickers. By observing stage acts and learning steps from experienced showmen like Sunshine Sammy and Kid Williams, Wilson became an able dancer and confident entertainer. Soon he appeared in black-and-tan clubs in Chicago and New York, sharing the company of such musicians as Louis Armstrong and Count Basie.

Back in Detroit, Wilson performed and organized chorus-girl lines at Mac Ivey's Cozy Corner on Hastings Street and the Chocolate Bar on Livingston. In the mid-1930s, he was elected one of the first unofficial mayors of Paradise Valley-the euphemistic name for Detroit's segregated East Side black community.

At this time Wilson also established the Detroit Golden Gloves training center in the basement of the Ebenezer Baptist Church. Not long afterward, he met young Golden Gloves boxing champion Joe Louis. From their first meeting, Wilson and Louis shared many similar interests, including boxing, cowboy movies, horses, and the company of entertainers.

Upon Louis' invitation, Wilson joined him in the ownership of the Brown Bomber Chicken Shack in 1937. Though the venture only lasted about five years, Wilson and Louis remained close friends and inseparable business partners. Wilson's respect for Louis was reciprocated by the boxing great, who always referred to his friend as Mr. Wilson. "Joe never called me Sunnie in his life," recalled Wilson in his memoir Toast of the Town. "He wouldn't let his fighters curse in front of me. They always called me 'the Reverend.'"

In 1941 Wilson purchased the Forest Club, an immense nightclub and recreation center on the corner of Hastings and Forest. Larger than Madison Square Garden, the Forest Club contained a 107-foot bar, a banquet hall, a roller skating rink, and a bowling alley. The Forest Club served as both a popular entertainment spot and a community center that held union meetings, etiquette courses, and Christmas parties for economically disadvantaged black children. During the Detroit riot that erupted on Hastings Street in June of 1943, Wilson distributed food to neighborhood residents from the Forest Club's storeroom.

Two years after acquiring the Forest Club, Wilson bought the Mark Twain Hotel. In an era of segregation, the 50-room hotel offered lodgings to black celebrities and entertainers. Among those who stayed at the hotel were Duke Ellington, Ray Charles, Sam Cooke, T-Bone Walker, and B. B. King. Always willing to help out entertainers, Wilson often loaned money or provided rooms for musicians. In the hotel's lounge, celebrities and listeners gathered to hear pianists such as Ellington, Nat King Cole, and Gene Ammons perform impromptu sessions into the late night hours.

In January of 1951 Wilson sold the Forest Club. Throughout the 1950s, Wilson promoted boxing matches and live stage shows. His partnership with Joe Louis took him on business trips throughout North America and the Caribbean. Throughout the fifties and sixties Wilson booked shows featuring acts such as B. B. King and comedian Jackie Gleason, both of whom established close friendships with the famous Detroit entrepreneur.

Over the next two decades Wilson worked as a political consultant. Beginning in 1972 he helped organize a number of successful mayoral campaigns of longtime friend Coleman A. Young. An active member of the Detroit community, Wilson never faded from public life. In 1987 he received the Spirit of Detroit Award, and in March of 1992 the Detroit Urban League honored him as a "Distinguished Warrior."

In a 1993 Detroit Free Press article Wilson stated that if African Americans are to overcome oppression, they must "be let in the mainstream, the stream that will take us through the hearts of all people as one people, not black or white." This forthright belief enabled Wilson to befriend many of the most powerful figures of the twentieth century and to extend a message of racial harmony that, as he confided to CBB, is requisite in "our march toward human progress."