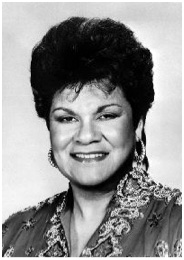 Martha Jean "The Queen" Steinberg, a black radio pioneer and scholar, helped set the guidelines and standards for black radio in America. "The Queen" started her radio career in 1954 at WDIA, in Memphis, Tennessee.

In 1963, radio station WCHB in Inkster, Michigan invited her to the Detroit area where she became an instant success. In 1982, Steinberg went to WQBH radio as vice president and general manager. Fourteen years later, Steinberg purchased WQBH (Queen's Broadcasting Corporation) and became president and general manager. She was the first African American female to own a radio station.

Steinberg contributed greatly to the development of black radio. She was one of four black radio pioneers at the New York City Museum of Television and Radio's first-ever seminar on "Black Radio, Yesterday and Today." She was featured in the Radio America series "Passing It On: Voices from Black America's Past," broadcast in 1995. She narrated the documentary on Barry Gordy and the early years of the Motown Sound, entitled "The Music & The Story," for The Henry Ford. She continued to host her noontime “Inspirations with the Queen” broadcasts on WQBH until two weeks before her death.

Steinberg received a number of awards for her outstanding achievements. The School of Social Work, Alumni Association, Wayne State University presented her with the U.S. Citizen of the Year award for her extraordinary contributions to the community. She also received the Michiganian of the Year award in 1996, an award recommended by Detroit newspaper readers and news staffs in recognition of contributions to the community and to the betterment of life in Michigan.

Martha Jean Steinberg was the single mother of three daughters, all of whom graduated from college and into successful careers. She was also a minister and founder of the nondenominational Order of the Fisherman Ministry.

She was a founding partner for the MGM-Grand Casino in Detroit.

Martha Jean "The Queen" Steinberg was a radio legend an inspiration and a powerful voice for peace, progress, prosperity and goodwill toward all.

Martha Jean Steinberg passed away on January 29, 2000. She is buried in a private mausoleum in Section U, Lot 43.