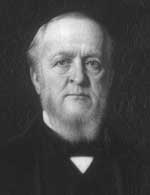 A wealthy businessman and banker, Henry Porter Baldwin served two terms as Governor of Michigan and became the fourth Governor to become a U. S. Senator.

The Baldwins moved to Detroit in 1838. He established a successful shoe manufacturing business. He later became a banker and manufactured chewing tobacco. Both Mr. And Mrs. Baldwin were active in the community, giving both their resources and time to charitable and cultural activities.

Baldwin took an active part in Republican politics as one of the founders of the party at the organizational meeting in Jackson, Michigan. He assisted with the draft of the first Republican platform seeking to abolish slavery. He was elected to the state Senate from Wayne County in 1861.

He married Sibyle Lambard in 1866 and they had seven children.

Baldwin was elected Governor of Michigan, serving from 1869 - 1873. During the second term as Governor, a devastating fire swept across Michigan from Holland and Manistee on Lake Michigan to the Saginaw Bay and the Thumb Area. Thousands of people were left homeless and destitute. A relief fund of over $450,000 was raised and Baldwin’s personal contribution was over one-third.

Upon completing his second term as Governor, Baldwin retired to private life. After the death of U. S. Senator Zachariah Chandler in 1879, he was appointed by Governor Croswell to fill the vacancy. He was unsuccessful in his 1881 bid for election to the Senate seat.

Baldwin, who was regarded as an easygoing and generous man, died on New Year’s Eve in 1893. He is buried in Section B, Lot 9. His monument is pictured below.