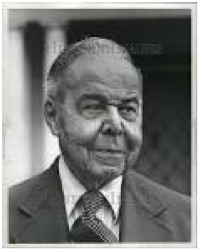 Renowned as a financial wizard, Alfred Pelham helped steer Wayne County government through economically challenging times from the 1920s to the 1950s and was twice called out of retirement by Detroit mayors to help solve the city's budget problems. In 1962 he became the first African-American controller for Detroit. He later dedicated his service to education in Detroit. Throughout his long career, Pelham helped Wayne County, the City of Detroit and other essential institutions remain financially healthy, thus contributing to the benefit of Southeast Michigan.

Alfred Pelham was born on June 19, 1900 in Ontario, Canada. His father was Benjamin Pelham, the long-time county accountant and unofficial head of the Wayne County government.  Pelham graduated with honors from Detroit's Central High School.  After attending Albion College for one year he moved on to the University of Michigan where he received a B.A. with a major in Business Administration and Accounting. Pelham then attended Harvard Graduate School of Business Administration where he earned a master's degree in 1925.

Pelham originally intended to go into private business, but took a job on the Wayne County Board of Auditors in 1925 because he felt his father was over worked and needed help with the county finances. He remained in that position until his father retired in 1942, whereupon Alfred Pelham became Wayne County director of Budget and Finance. He served as County budget director until retiring in 1957 to become vice president of finance and professor of political science at Wayne State University. In 1962 Mayor Jerome Cavanagh appointed Pelham city controller, making him the first African American to hold that post. In this position, Pelham helped reform the city's finances. Of particular note was his work in setting up the machinery to levy and collect Detroit's first income tax. In 1964 Pelham returned to Wayne State University where he continued to work until becoming chairman of the board of Great Lakes Insurance Company in 1968. The next year, Pelham was again summoned, this time by Mayor Roman Gribbs, to help the city during difficult financial times. In 1971, Pelham was appointed interim president of Wayne County Community College when it was in danger of going bankrupt and was able to return the college to financial stability. The following year he chaired a special committee convened to keep the Detroit Public Schools solvent in the face of a budgetary crisis.

Pelham managed to stay involved in the community in other ways even while fulfilling all these roles. He served on the board of directors for the Detroit Historical Commission, the Mayor's Committee for Economic Growth, the Boys Republic, the United Community Services, as a trustee of Children's Hospital, and as a trustee of the Founders Society of the Detroit Institute of the Arts. He also managed to find time to author children's poetry, which was published in local papers and in a published volume, Poems for Children.